A few weeks ago, we finally (finally!) found our way to Sorghum & Salt, which opened earlier this year on a quiet stretch of Coming Street.  While its location is a bit under-the-radar, its food deserves to be anything but – the rave reviews we’ve heard were absolutely accurate.  The restaurant’s menu focuses on locally-sourced, vegetable-heavy small plates, and while we’re not vegetarians, we might consider it if we could eat here every day!

We were fortunate to be joined by one of our favorite guest eaters (thanks for coming, Laura!), so we were able to try a (some might say embarrassingly large) number of the night’s offerings.  Unlike some of the small plate-centric restaurants we’ve tried recently, the meal was expertly paced; we weren’t swamped with multiple dishes at once, nor did we wait very long between courses.  We especially appreciated the thought our server put into the progression of our meal – lighter dishes arrived first before giving way to heartier fare, preventing any of the more delicate selections from being overshadowed.

BREAD SERVICE ($5): First up was the bread, because we are fundamentally incapable of saying no to bread.  The brown sugar bread was perfectly baked and surprisingly large, though we wished the flavor of the short rib butter (infused with meat from nearby Keegan-Filion farm) was stronger.

SOY CURED STEELHEAD SALMON – CUCUMBER – AVOCADO – SZECHUAN OIL – BABY SORREL ($14): Any minor disappointment we had over the butter was erased as soon as we tasted the salmon.  Imagine the freshest, fanciest bite of salmon sashimi you’ve ever had and you are mentally tasting this dish.  The soy cure flavor dominated but did not overwhelm, and the other ingredients worked in perfect harmony.    This is an absolute must order if you see it on the menu – next time, we’ll probably order two.

GREEN TEA NOODLES – 6-MINUTE EGG – CHARRED BROCCOLI – HERB PUREE ($13): This was a very interesting dish, and one we ordered without being sure we were going to like it.  The cold, soba-esque noodles infused with green tea were good, unless you accompanied them with a bite of the jammy, sous vide egg – then they were fantastic. 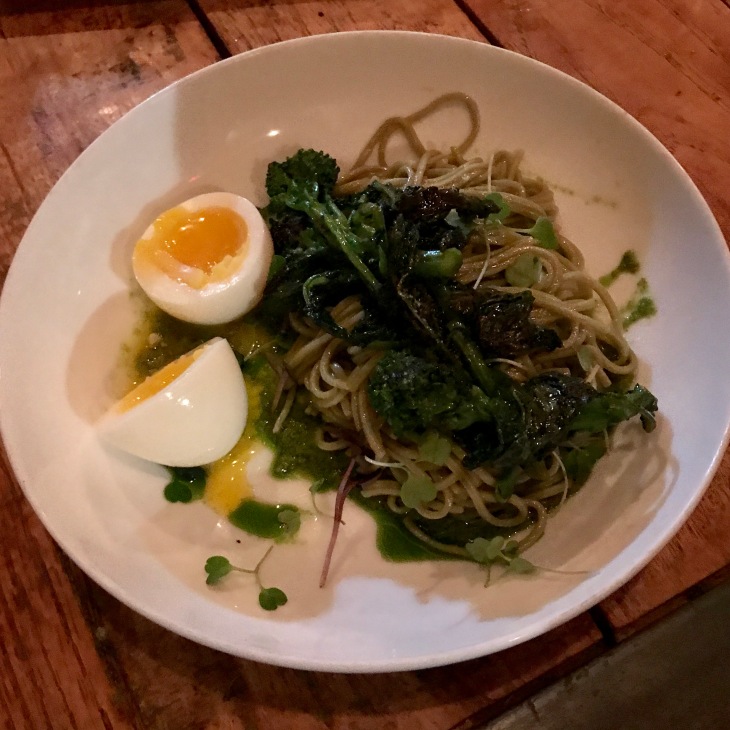 SMOKED GROWFOOD EGGPLANT – HOUSE MADE LAMB BACON – APRICOT MOSTARDA – WHIPPED FETA ($14): We smelled this dish before we saw it, and we knew we were going to love it.  We passed the plate around the table multiple times just so that we could smell the incredible lamb bacon.  The apricot mostarda’s sweet acidity cut the richness of the eggplant and bacon to make this dish much more than the sum of its parts.  This wasn’t a dish we all agreed on up front, but after it was gone we agreed it was the standout of the evening. 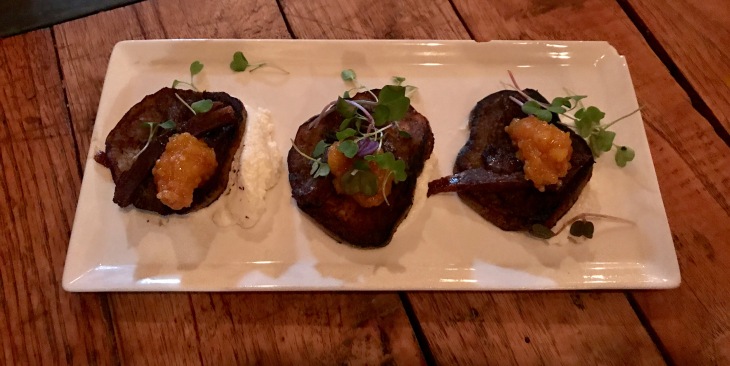 CRISPY POTATOES – CANDIED SALMON – HOUSE MADE KEWPIE – PICKLED COLLARDS  ($13): We were very excited about the potatoes with house made Kewpie mayonnaise, but didn’t know what to expect with the salmon.  While we all enjoyed the perfectly roasted potatoes, we found that the salmon brought an oddly sweet taste to the dish.  This is one we’d pass on in the future.

HOUSE MADE SAUSAGE – SMASHED PEAR – POPPED SORGHUM – FENNEL CREAM ($14):  Sausage and pear was an unexpected duo, but it ended up being an all-around hit.  This dish was more straightforward than most of what we ordered, but it’s hard to say anything bad about a great, homemade sausage that has been cooked to crispy perfection.  And the addition of popcorn certainly didn’t hurt!

SMOKED CARROT RIGATONI – SALSA VERDE – SPICED PUMPKIN SEED – RICOTTA SALATA ($16): It’s a testament to Sorghum & Salt’s skill and ingenuity with vegetables that this meatless dish ended up being the heartiest of the evening.  This arrived at the end of a large meal and the three of us were slowing down a bit, but we managed to clean the plate.  The crunchy pumpkin seeds provided a nice textural counterpoint to the creamy carrots and pasta.  As with several of the evening’s courses, we would never have thought to combine these ingredients, but this was definitely a winner.

BEET CREMEUX – ESPRESSO – ELDERFLOWER – COCOA NIB – PISTACHIO ($12) – Oh these beets.  Hands down the best course of one of the best meals we have had in quite a while.  We weren’t sure that the eggplant / lamb bacon dish could be topped, but this dessert was unbelievable.  As we learned from the kitchen, the beets were roasted with a ton of butter, and then infused into form that was not quite cake, not quite panna cotta, not quite pudding, not quite fudge – but exactly perfect.  This was definitely a dessert that makes you think, as it’s rather different from most restaurants’ standard offerings.  But you will be richly rewarded if this is how you choose to end your time at Sorghum & Salt.

Our only regret with Sorghum & Salt is that it took us so long to try it!  We will definitely be back sooner rather than later – this is an amazing restaurant doing incredible things with local ingredients, and we can’t wait to see how its menu changes with the seasons. 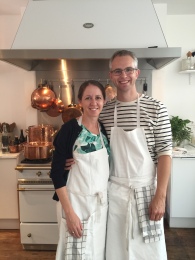